“Given the thousands of individuals waiting for residential opportunities statewide, whose parents are aging and exhausted, we are asking our state elected officials, the Governor and OPWDD to include another 459 residential opportunities in the 2018-19 state budget at a cost of $14.7 million this year. This will give families both hope for the future and much needed relief,” said Linda Tempel, Executive Director of Developmental Disabilities Services at HeartShare Human Services of New York.

Linda Tempel pointed out that it’s not just the lack of residential options, but also how the housing stock is handled. OPWDD’s 2016 report on the Residential Request List identified thousands of people throughout New York State are waitlisted. Among those waitlisted, 46% are living with a caregiver over the age of 60, 53% have only one caregiver at home, and 48% need help with almost all activities of daily living.

However, placements most often do not occur until the individual and the family are in a crisis situation—when a caregiver is too sick or too disabled to care for their family member, or worse, when the caregiver has passed away and it is truly a dire emergency situation. The Council proposed the full use of $120 million, which had been included in the Governor’s proposed budget for day, at home support, out of home residential and other services. However, the full $120 million has not been spent to meet the critical housing gap. The Council also asked for an additional $15 million to expand affordable, accessible housing with services allowing people with disabilities to live in the community.

The housing crisis for people with disabilities is especially on the minds of parents and caretakers. “Early on, I’ve had to face my own mortality and realize that I need someone to take care of my son when I’m no longer around,” said Michael Bolton, whose son Justin moved into HeartShare’s Elvis Duran Residence in the Mill Basin section of Brooklyn two years ago. “At HeartShare, I know he’s safe, happy and healthy. I have peace of mind,” he added. 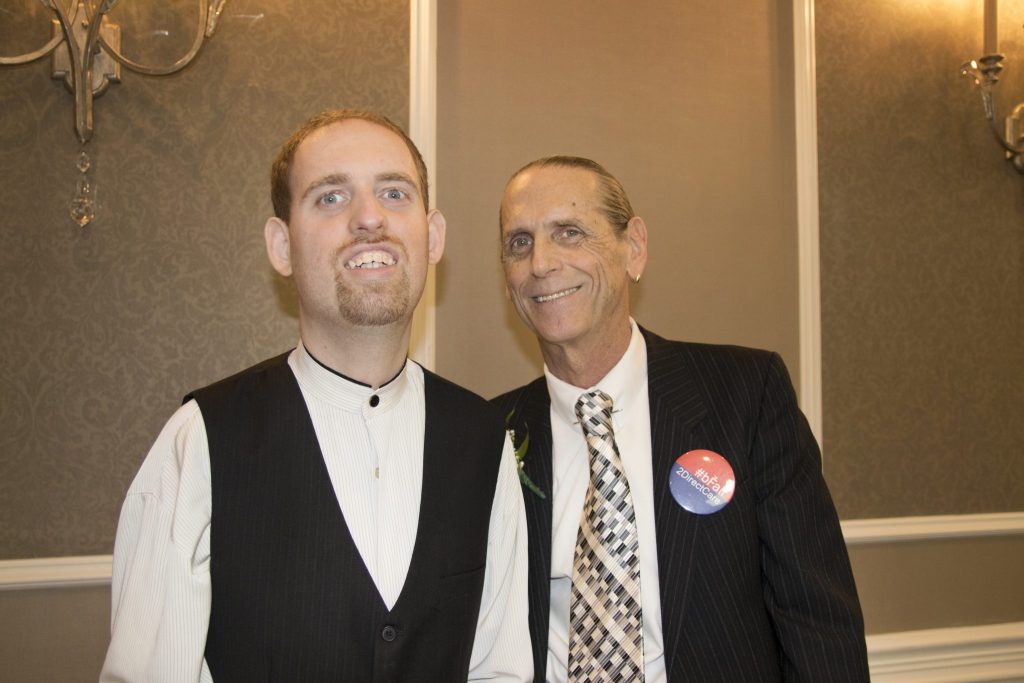 Justin, who lives in a HeartShare Residence, with his father and advocate Michael Bolton. “Direct Support Professionals are there when parents and other family members cannot be, but unfortunately, so many DSPs are unable to continue this work because they cannot support their own families on current wages,” said Bolton at the Legislative Brunch.

“It’s a disservice to the entire community when we don’t meet the full service needs of individuals with disabilities,” said Senator Roxanne Persaud, whose mother worked as a direct support professional throughout her lifetime. Senator Persaud carries on her mother’s legacy in direct care by keeping in frequent communication with members of the disability community, including Bobby who participates in HeartShare’s Brooklyn PACT Program, and who attended the brunch with his mother, Valerie Woodford.

The legislative agenda also addressed the dire need for a living wage for Direct Support Professionals. “Direct Care workers are very important in South Brooklyn, and across the state, because of all the great work they do for the community and those they serve. This next legislative session we must build upon the successes we had last year in creating a fair wage and better opportunities for these dedicated caregivers,” said Assembly Member Peter Abbate.

“We need stability in the services we provide to people with disabilities. Democrats, Republicans, Independents all agree on this,” Senator Diane Savino said speaking of the much needed salary increase for Direct Support Professionals. Savino also shared her early career experiences as a case worker.

Senator Golden announced that his colleagues delivered a 3.25% increase as of January 1 as part of last year’s budget and another 3.25% increase on April 1st for a combined total of 6.5%. Additionally, Senator Marty Golden expressed the need for increased funding to stabilize early intervention, preschool, and school age programs. “We need increased early intervention program reimbursement rates, so that we can start helping kids at a very young age. We also need more funding for special education schools, programs and tuition increases,” said Golden.

Jay Kiyonaga, the Executive Deputy Commissioner the NYS Office for People with Developmental Disabilities (OPWDD) responded with highlights of agency accomplishments, including an increase in certified housing and employment supports, such as opportunities in supportive housing and an increase in self-direction funding.

The Brooklyn Developmental Disabilities Council serves as an advisory to OPWDD, as well as other government agencies and organizations associated with serving individuals with developmental disabilities in Brooklyn.

For the full legislative agenda, visit https://www.brooklynddcouncil.org/. For more photos from the event, see the Facebook Album.