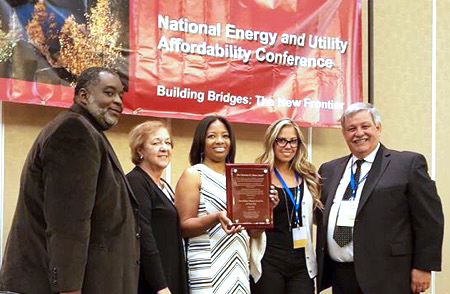 HeartShare received the 2016 Victorine Q. Adams Excellence Award for its role in creating the largest network among utility companies, elected officials and community organizations nationally. The award is from the National Energy and Utility Affordability Coalition (NEUAC), an awareness-raising coalition for low-income energy consumers. As a recipient of this award, HeartShare also will sit on the NEUAC Board.

Under the leadership of Joseph Guarinello, HeartShare Vice President of Energy Assistance and Community Development, the agency has prioritized the education of elected officials on low income issues and in building productive relationships within communities. HeartShare’s efforts include annual trips to the Capitol, where the team advocates for federal funding known as Low Income Housing Energy Assistance Program or LIHEAP. Through those efforts, HeartShare currently reaches over 23,000 people in 60 of the 62 New York State counties.

To learn more about how to donate to our Energy Assistance Programs, contact Tanya.Brothers@heartshare.org.