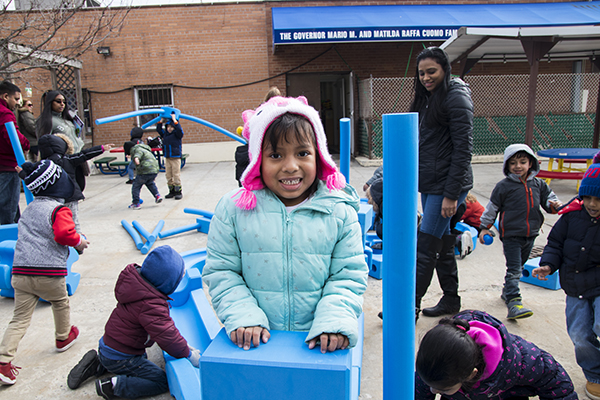 One of the many pre-schoolers at HeartShare’s First Step Program to enjoy the unveiling of the KaBOOM! Imagination Playground, which promotes creative play for young, growing minds.

HeartShare’s Cuomo First Step pre-schoolers are enjoying the new activity thanks to a grant provided by Target and national non-profit KaBOOM! Senator Joseph Addabbo, Jr. and Assemblyman David Weprin, who have been long-time advocates for early education programs at HeartShare, came by for the ribbon-cutting on Friday morning.

KaBOOM!, the national non-profit dedicated to giving all kids the childhood they deserve through play, is working with Target to increase access to play across the country. Grants for Imagination Playgrounds are helping to achieve that goal by bringing active play to more than 430,000 kids across the country.

Imagination Playground in a Cart™ is an innovative design in play equipment that encourages creativity, communication and collaboration in play. With a collection of custom-designed, oversized blue foam parts, Imagination PlaygroundTM provides a changing array of elements that allow children to turn their playground into a space constantly built and re-built by their imagination. 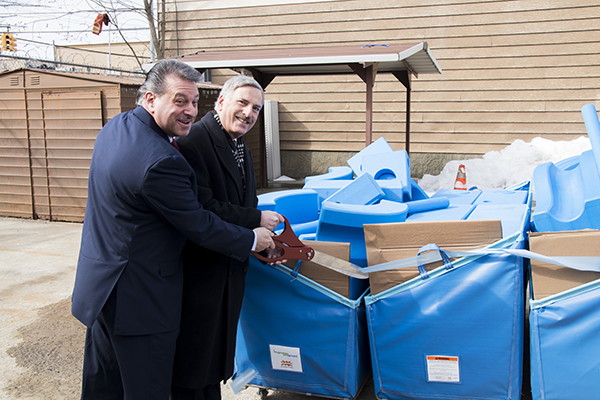 Unstructured, child-directed play has proven to help kids develop physically, emotionally, socially and intellectually, yet today’s kids have less time and fewer opportunities to play than any previous generation. The grant is part of Target’s ongoing efforts to help make wellness more affordable, accessible and inspirational for its team members, guests and communities.

HeartShare’s four First Step Early Childhood Centers in Brooklyn and Queens include special needs, integrated and Pre-K for All classrooms. By graduation, some have learned to walk, others to talk, communicate, and interact with other children. In every case, they have taken an important First Step toward their future and the learning path they will continue in kindergarten or special education classes.