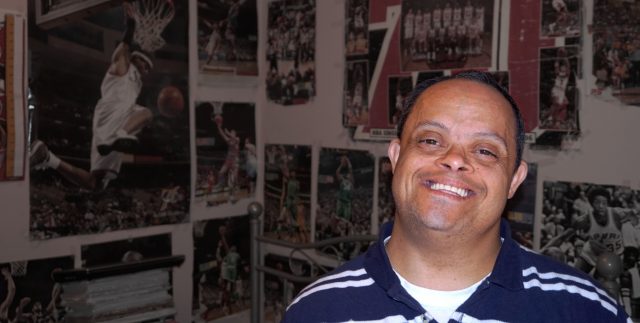 John lived with his family for most of his life, but recently his parents passed away. “That’s when I moved in here,” revealed John with tears in his eyes. “This is my home now,” said John again, but with a smile, his eyes moving from the front entrance of the Woodhaven home to Assistant Coordinator of HeartShare Healy I and II Residences Ebony Paige-Harris. With the caring, 24/7 staff at the residence focused on supporting John in building skills for even greater independence, his future is bright. He attends HeartShare’s Queen Day Habilitation Program during the week, returning home for errands in the community, dinner and one of his favorite past times—word puzzles. His bedroom is his personal sanctuary. Every square inch is covered with posters reflecting his many interests, including those paying homage to key basketball moves on the court since the 1980s. Many people with intellectual and developmental disabilities have few housing options. They live with their families, who might not have the capacity to provide the extensive care they need. Parents also worry about how their children will be cared for when they are no longer there. Not too long ago, people with disabilities may have lived in restrictive, institutional settings called developmental centers, which New York State is in the process of closing. HeartShare has over 40 supervised group homes and 50 independent living apartments to make this inclusion in the New York community possible. At HeartShare, people like John can live with freedom and independence in the community.