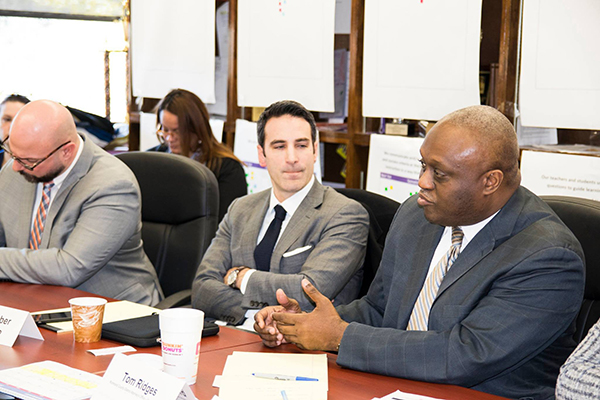 “HeartShare St. Vincent’s Services is here to learn more about your greatest struggles when it comes to chemical dependency and how we can more effectively deliver services to your communities,” said HSVS Executive Director Dawn Saffayeh, who opened the discussion to Staten Island elected officials, non-profit leaders, educators and other community partners. HSVS has three Chemical Dependency Clinics in Brooklyn, Queens and Staten Island. The Staten Island clinic is located at 56 Bay Street, 1st Floor.

Several issues arose during the discussion, including the lack of cross-sector collaboration, the lack of preventive treatment options, as well as easy accessibility to drugs across the Island. “This problem knows no race, age or economic status,” noted Lisa Candella, Assistant Commissioner of Staten Island Adult and Juvenile Operations, NYC Department of Probation.

First, government agencies and stakeholders are facing the same problem on the Island, but are not coming up with intersectional solutions. Olivia Dana, Project Director at Staten Island Youth Justice Center, suggested that there needs to be more of a bridge between the authorities and those struggling with addiction. “Our kids need to see police departments and elected officials as members of the community trying to help,” Dana explained. Jennifer Sammartino, Director of Communications and External Affairs for the Staten Island Borough President, mentioned James Oddo’s “Too Good for Drugs” initiative, which builds a sense of community when police officers teach in fifth grade classrooms across the borough.

In response, Dawn Saffayeh asked the group about the viability of home or school based services. Educators at Tottenville High School including Principal Joseph Scarmato and Assistant Principal of Guidance Stacie Watkins stressed that reporting families to Administration for Children’s Services (ACS) is a last resort and instead, would like to provide much-needed counseling and treatment to students on-site at the school. “HeartShare St. Vincent’s Services wants to work with and bridge connections with existing providers. We don’t want to reinvent the wheel,” explained Jennifer Outlaw, Senior Vice President of HSVS Integrated Health Services, which is a “one stop shop” to patients in need of chemical dependency and mental health services, which are co-located at each HSVS clinic.

Lastly, the group discussed the easy accessibility to drugs across the Island. Dr. Ginny Mantello, MD, James Oddo’s Director of Health and Wellness, reported that Staten Island has the highest number of unintentional overdose deaths in the City. “Pharmacies pushed opioids and medical practitioners were misinformed about the addictive nature of those drugs, which are now plentiful in homes,” explained Dr. Mantello. Senior Nurse Kathleen Rainero of the Visiting Nurse Association of Staten Island shared a personal anecdote about how she received a prescription for chronic pain, but instead turned to physical therapy. “Whether it’s emotional or physical, people need to know that there are other options to manage pain,” Rainero said.

The 90-minute discussion laid the foundation for future action. “As Staten Island continues to grapple with the heroin and opioid epidemic plaguing our borough, we applaud HeartShare St. Vincent’s Services and look forward to a continued partnership with organizations dedicated to helping those battling addiction,” said District Attorney Michael McMahon. “HeartShare St. Vincent’s provided us with an opportunity to discuss how local treatment providers can better meet the needs of those battling an addiction to opioids and other substances,” added Councilmember Debi Rose.

HeartShare St. Vincent’s Services aims to reconvene the group, with additional community partners, in about six months to discuss progress and move this collaborative solution-based model forward. If you are interested in partnering with HeartShare St. Vincent’s Services to bring chemical dependency treatment to a specific community in Brooklyn, Queens or Staten Island, please feel free to reach out to Jennifer.Outlaw@heartshare.org for further discussion.

More photos from the event may be found on the HSVS Facebook page.