HSVS, In The Media, Youth

The HSVS Preparing Youth for Adulthood (PYA) workshop utilized Michelle Alexander’s The New Jim Crow as a lens for older youth in foster care to reflect on their experiences with institutional racism, as well as learn digestible steps to overcome those systemic challenges.

HeartShare St. Vincent’s Services (HSVS) hosted a workshop for its older youth in foster care to discuss Michelle Alexander’s The New Jim Crow: Mass Incarceration in an Age of Colorblindness on Thursday, January 26, 2017.

Approximately 30 young people, predominately young African American men, attended the session, which centered upon the public policies that have been stacked against them for decades.

Youth Development Supervisor Jermaine Smith reviewed U.S. history from slavery through Brown v. Board of Education before jumping into Alexander’s book, which discusses the underlying racial undertones of the “War on Drugs” and mandatory minimum sentencing.

Many of the college-aged participants wanted to know why their discussion leader was talking about administrations of times past. “We need to move forward,” one of the young men insisted, “Why go through what happened decades ago?” Without Jermaine’s interjection, another youth responded, “Because sometimes racism isn’t overt anymore, but it’s still there.”

The forum welcomed an open discussion of race, including workshop participants talking openly and directly about their skin color. The young white, Latino, and African American men and women shared their experiences with employment, education, housing and law enforcement, while actively comparing and contrasting it to their peers in the room. 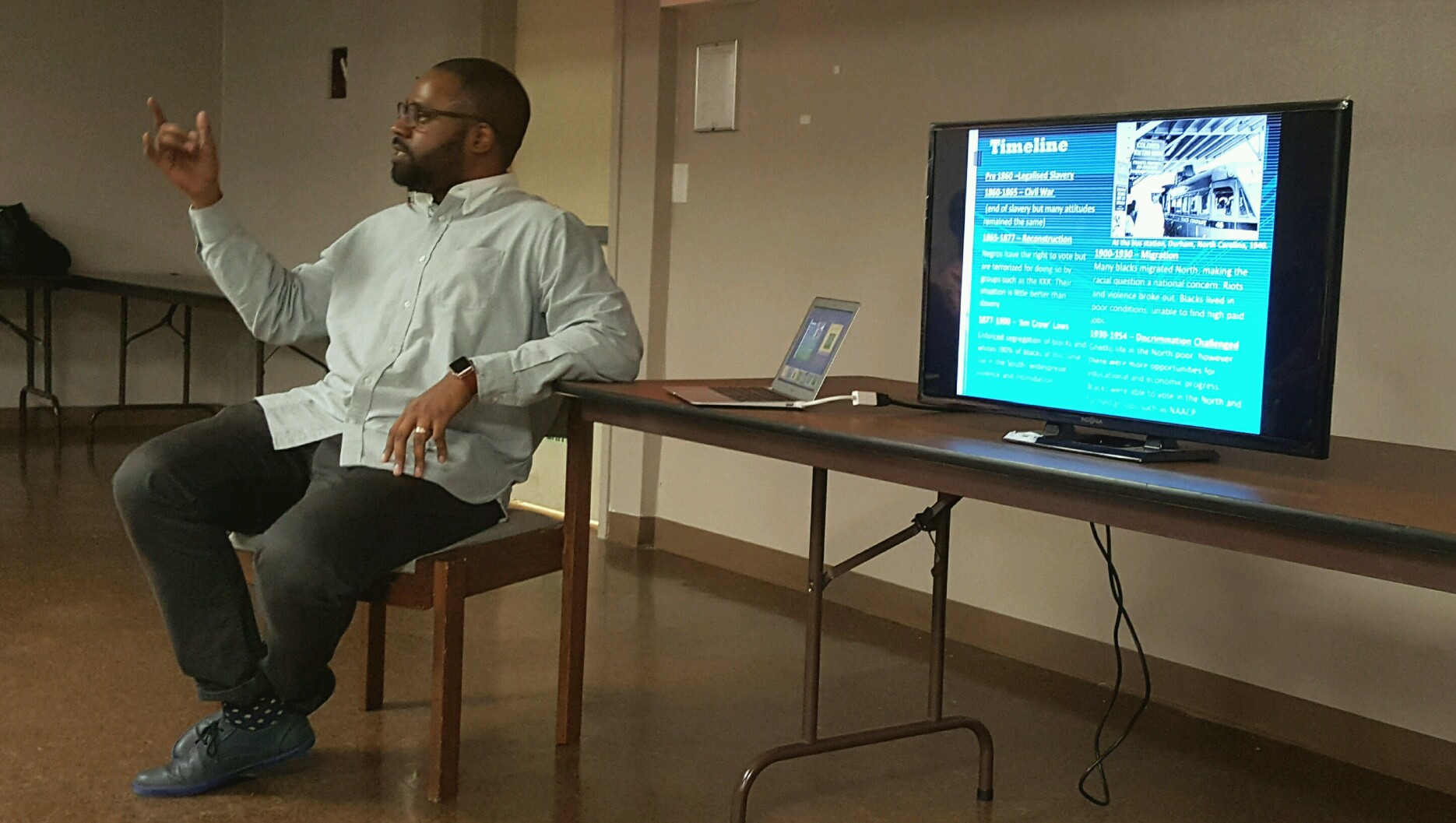 HSVS Youth Development Supervisor Jermaine Smith gave an overview of U.S. history, then went on to share segments of an interview with Michelle Alexander, as well as from Netflix’s documentary 13th on race and mass incarceration.

One young man shared his experience about how he was crossing the street one day and happened to be walking beyond a group of white pedestrians. A cop car circled around the block and pulled him aside saying he fit the profile for recent criminal incidents in the area. In the same vein, Smith shared the familiar statistic that although marijuana use is relatively equal among white and black people, African Americans are more than 3 times as likely to be arrested for marijuana possession.

Additionally, some of the participants wanted to know why political life was relevant to them, while others acknowledged the influence of politics on their lives. Jermaine offered a portrait of poverty and discrimination that people experience after being unfairly incarcerated, as well as disenfranchisement, which prevents the ability to vote for leaders who enact more equitable policies.

Jermaine tied up the discussion with another key takeaway. “What you do now will affect your children. One day, when you’re done with college, GED program or whatever you’re doing, you’re going to get a job and that job has benefits. That stable life is going to give you the power to support your children and break the cycle of poverty.”

The workshop, which truly sparked dialogue among its participants, tackled lightning rod issues that are easy to avoid. HeartShare St. Vincent’s Services, particularly its Youth Development Department working closely with older kids aging out of the foster care system, not only provides essential services, like residential options, but aims higher. HSVS helps youth find their way to college, the career of their choice, emotional supports and in turn, even, out of the cycle of poverty.

“Next workshop, homelessness for youth aging out of care,” Jermaine announced to the group. “It’s real and we’re going to talk about it.”

To learn more at hsvsnyc.org.