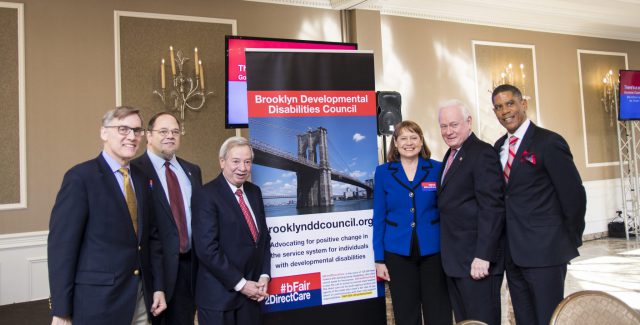 The event convenes local stakeholders, including frontline employees, program participants and their families, who advocate for more government dollars for people with intellectual and developmental disabilities (I/DD). Providers like HeartShare Human Services are contracted by the City and State to offer those services. Senator Marty Golden, as well as Assemblymembers Peter Abbate, Felix Ortiz, Pamela Harris, and Steven Cymbrowitz came to show their support.

Approximately $45 million needs to be appropriated to the salaries of frontline workers caring for people with disabilities, known as Direct Support Professionals or DSPs. “How am I supposed to live without you?” crooned Assemblymember Pamela Harris, using the famous tune to question the lack of investment in DSP salaries. Harris shared her personal connection to people with I/DD. Harris’ mother started her career as a DSP. Her mother also served as an Occupational Therapist at Willowbrook State School.

Lorenzo Brown, Council Chairperson and CEO of Heaven’s Hands Community Services, presented an award to one of his DSPs. David Williams is 25 years old, lives in Flatbush and is studying psychology at City College in Harlem. David, a part-time DSP, works for a Heaven’s Hands community habilitation program. Williams travels to the home of Kevin, the individual with I/DD to work with him one-on-one, including developing practical life skills at home and in the community. David went above and beyond when he found Kevin’s mother unconscious at home, called for help and provided support to Kevin and his family in the coming days.

Gary Lind, Executive Director of AHRC, noted that an MIT study substantiates the $45 million, or a 2.3 percent annual increase, for a DSP living wage in New York State. Additionally, Lind pointed out that this is not just a human rights issue, but also an economic justice issue, as the majority of DSP workers are women and people of color. “I was speaking to Carol Verdi [Vice President of Education Services] at HeartShare and she explained that there’s a 20 percent vacancy rate in those education programs,” said Senator Marty Golden. “Do you know how rare it is to love your job? They do. We have to give them a living wage.”

The breakfast extended dialogue on the #bFair2DirectCare campaign, but also explored other crucial budget items, including investment in early intervention and housing options. Assemblymember Robert Carroll acknowledged the lack of funding for 4410 and 853 schools for special needs students. “We give tax cuts to real estate developers or those who make over $1 million, but we’re not providing what Congress defines as a ‘free and appropriate education for all students,'” said Carroll. Eileen Hopkins, Deputy Executive Director of Eden II said that higher need students are chronically underfunded.

Some concerns were addressed by Roger Bearden, General Counsel for NYS Office for People with Developmental Disabilities (OPWDD), who spoke about the agency’s investment in housing resources. “Know that we have been listening and we are shaping our plans based on that input,” said Bearden, who spoke of $120M for new residential services for people with I/DD, as well as $15M for supportive housing, which includes apartments and other customized options beyond the group home model. OPWDD has a three year housing plan, which includes the closure of the Bernard Fineson Developmental Center in Queens and further driving the housing need for this group.

Assemblymember Peter Abbate encouraged parents, employees and others at the breakfast not to give up the fight. “Be sure to check in with your legislators around March 13th or 14th. Make sure that the $45 million and other allocations are not taken out of the budget,” Abbate said.

HeartShare has residential, day habilitation, special education and other programs for children and adults with intellectual and developmental disabilities throughout Brooklyn, Queens and Staten Island. For more information on the Council, visit www.brooklynddcouncil.org.