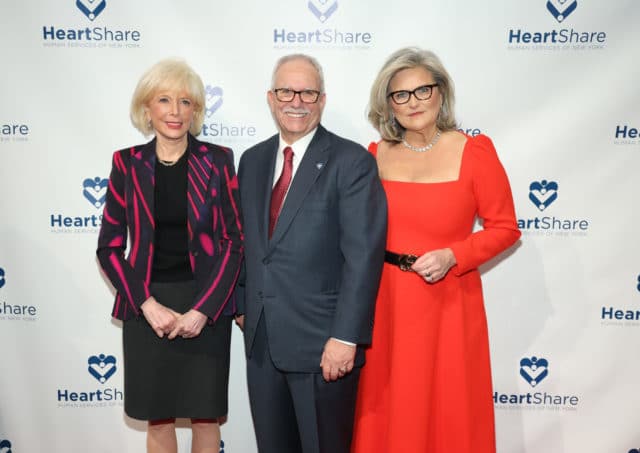 “Good evening, HeartShare! Long time no see!” Co-host Jim Kerr got right to the heart of the matter as he greeted the crowd gathered at New York City’s illustrious Ziegfeld Ballroom for the 2022 HeartShare Spring Gala on Monday, March 21. Due to COVID-19, it was the nonprofit’s first in-person Gala since 2019, but it more than made up for two years without one.

A celebration of the HeartShare Family, the event drew more than 400 HeartShare supporters, Board Members, corporate sponsors, partners, celebrities and staffers to a red-carpet affair with all the glitz and glamour of a Hollywood premiere beneath HeartShare’s name in lights on the Ziegfeld’s iconic marquee. The Gala was also viewed online by more than 100 virtual attendees.

Cynthia McFadden, Senior Legal and Investigative Correspondent, NBC News, and recipient of the Heart of a Champion Award, was introduced by 13-time Emmy winner, “60 Minutes” correspondent and dear friend Lesley Stahl, who described McFadden as “the most dazzling and most accomplished reporter in the universe… the Ted Lasso of TV journalism… who proves that you can do a stressful, high-powered job on a big stage and still be kind.” In accepting an award with “heart” in the title, McFadden noted that, “As a person who often covers heartbreak, I take matters of the heart very seriously… As I often said to my old pal Barbara Walters, ‘You make the people you interview cry. The people I interview make me cry.’ Here’s the truth as I know it: If I feel too much, I can’t do my job, and if I feel not enough, I’m not doing my job. So, I try.”

Michael W. Castellano, co-owner of Staten Island’s Supreme Italian Market, accepted the Catherine White Achievement Award for directing his passion and resources into helping people with special needs and for channeling the success of his business into philanthropic endeavors. “I’m just a guy from Staten Island,” he said, “and to receive this award from HeartShare for doing what I love doing truly blows me away… I am so very humbled by your thoughtfulness and kindness.”

Douglas P. Catalano, Esq., partner with Clifton Budd & DeMaria and recipient of the HeartShare Visionary Award, chose to let personal photos do the talking. After describing how he and his wife Judi were inspired to support and contribute to HeartShare by a grandson with autism, he stepped aside as a slideshow of him and his family with his grandson played. When it was over, there wasn’t a dry eye in the house.

In between the awards and acceptances, auctioneer CK Swett encouraged attendees to text donations, bid live on impressive auction items and peruse the online Silent Auction. The Gala also showcased two inspiring short films. The first, “True Colors,” highlighted the healing power of HeartShare’s ArtShare program at the Brooklyn Day Habilitation Program as seen through the eyes of Senior Program Coordinator and ArtShare volunteer Edgardo Velez. The second film, a music video, featured three women from the Queens Day Hab Singers—Camille Tyson, Paula Samaroo and Joanna Norris-Boyd—performing a soul-shaking version of Rachel Platten’s “Fight Song.” The performance inspired a one-minute standing ovation for the trio, who were in attendance.

“The Gala was a long-overdue HeartShare Family reunion,” says HeartShare President and CEO Bill Guarinello. “Like the song says, we are family, and our family is one of the most loyal and loving anywhere. After everything we’ve been through in the past two years, it was truly wonderful to finally be able to get together again. And not only get together, but show support for the vulnerable New Yorkers in HeartShare’s care. Everyone should be so lucky to have a family like ours.”