Boy with Autism Learns to Speak at The HeartShare School

HeartShare truly believes in the potential of children and adults with special needs. With 24/7 exposure to skilled, compassionate staff at The HeartShare School and the HeartShare’s Children’s Residence next door, Tallal was able to make this extraordinary breakthrough to become more independent.

“Imagine wanting to tell someone something and you couldn’t. It’s terrible.” Samantha Phillips works as a speech therapist at The HeartShare School for children ages 5-21 with autism in Bensonhurst, Brooklyn.

Samantha was describing the daily experiences of Tallal, a 13 year old boy with autism who couldn’t speak to communicate when he first started at the school. When a child is diagnosed as non-verbal, the probability of speaking diminishes with each passing year. “If children aren’t speaking by age 6, 7 or 8, they say the window of opportunity has closed. With Tallal, that’s not the case. It confirms there’s hope for our students as they grow older,” said Sharon Toledo, Director of The HeartShare School.

Over the past five years, Samanatha has met with Tallal for speech therapy. While reading books together, Samantha engages in prompt therapy, where she shows Tallal how sounds are produced for different words. “In our early sessions, Tallal couldn’t vocalize. Now, he’s able to make basic requests using words,” Samantha explained. 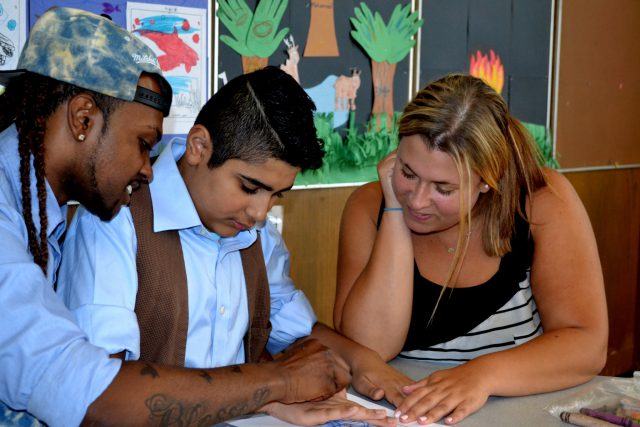 Tying together his ABA classroom learning and therapy sessions has been Darnell Blackburn, Tallal’s one-to-one staff, or more accurately his best friend, companion and big brother. For the past five years, Darnell has spent 16 hours a day with Tallal, at his side for the entire school day and then watching over him at HeartShare’s Children’s Residence adjacent to The HeartShare School. “I’m only with him a few hours a day,” his Speech Therapist modestly insisted. “Darnell is the positive reinforcement.” Darnell verbalizes their activities to weave spoken language into Tallal’s daily experiences. Darnell also is trained in sign language, which helped facilitate spoken language.

While many people might have found it daunting to communicate effectively with someone like Tallal, Darnell did not. “With empathy, I put myself in his shoes. Children with autism have their ways of communicating and it’s our job to study them,” said Darnell.

Tallal was with Darnell on residential time when he spoke his first words. “We were out in the community and the word ‘me’ came out of him. I was so shocked that I asked him to repeat it. I couldn’t wait to tell the entire team,” recalled Darnell. The HeartShare School team wasn’t the only family thrilled to hear the news.

“There was a two week differential between Tallal’s first words and Mother’s Day. We didn’t break the news to his parents because we wanted it to be a surprise. When I took Tallal home for the weekend, he said ‘I love you, Mommy.’ All she ever wanted was to hear her son speak,” Darnell shared. The HeartShare School made that possible.

When he first started at The HeartShare School, Tallal engaged in more self-soothing repetitive behaviors. “Tallal was behavioral because he had trouble communicating his wants and needs. He had a very difficult time engaging in any functional activities,” explained Kristin Tursky, an occupational therapist at the school. Tursky works with Tallal to build self-help skills, like lacing shoes or buttoning a shirt, as well as pre-writing skills, like learning how to grip a pen for writing more seamlessly.

Despite their abilities, societal limitations constrain how independent children and adults with intellectual and developmental disabilities can become. Tallal’s comprehensive education and his extraordinary progress exemplify how HeartShare helps people with special needs defy expectations and reach their potential. “You don’t expect a child reaching their teenage years to gain that skill, but with persistence and patience, Tallal was able to accomplish this. Now, every time I see him, he has a new word in his litany,” said HeartShare Vice President of Education Services Carol Verdi with a smile.