From the Heart: “If you can help one person, you’ll be happy,” says Brooklyn Day Hab’s Edgardo Velez 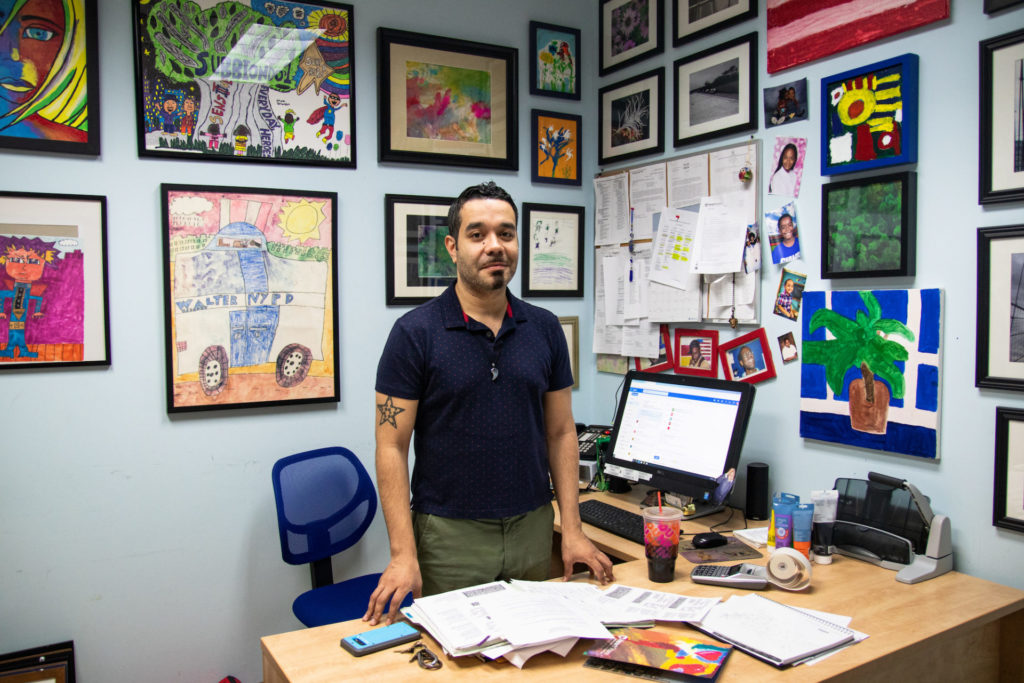 The walls of Edgardo Velez’s office are covered with artwork created by the individuals who attend Brooklyn Day Hab.

For Edgardo Velez, it’s never been about being the “boss.” To him, what’s most important is being a leader.

Velez is the Senior Program Coordinator at HeartShare’s Brooklyn Day Habilitation Program in Downtown Brooklyn and has worked at HeartShare for 16 years. He started as a Direct Support Professional (DSP) and made his way up the ranks, creating lifelong bonds and changing lives along the way.

“What I do really does come from the heart,” he says.

The walls of his office attest to that sentiment. Covering nearly every square inch are paintings and drawings created by the individuals in ArtShare, a program Velez spearheaded 11 years ago that fosters artistic expression by individuals with intellectual and developmental disabilities. While many professionals at his level display their own diplomas and awards, he’d rather showcase others’ accomplishments. 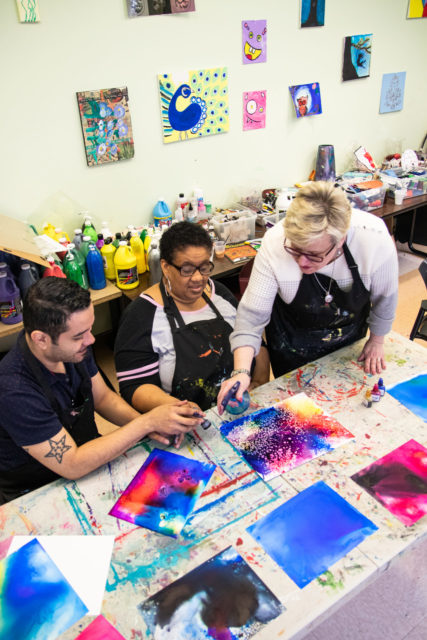 Velez and Barbara Nowak-Cuthel (right), co-curators of ArtShare, collaborate with an individual on a new artwork.

“My goal is to give the individuals a place where their talents can flourish,” he says. “So, instead of hanging my own awards or certificates in my office, I prefer to hang the individuals’ artwork because I consider that my greatest achievement in all my years at HeartShare.

Currently, there are about 60 individuals enrolled in Brooklyn Day Hab’s programming. Every weekday morning, they make their way to 177 Livingston Street and start the day with Daily Notes, a one-on-one meeting between an individual and a DSP to go over the individual’s goals for the day. After that, the individuals spend most of their day out in the community doing volunteer work or visiting work sites.

Velez says it’s important that the individuals have a say in what they do. To that end, each week, when the following week’s schedule is being created, the list of options is shown to the individuals so they can plan their own upcoming week.

“The supervisors don’t just tell them what to do,” says Velez. “Choices make people a lot happier.”

He’s quick to point out that Brooklyn Day Hab would not be as successful without his team. 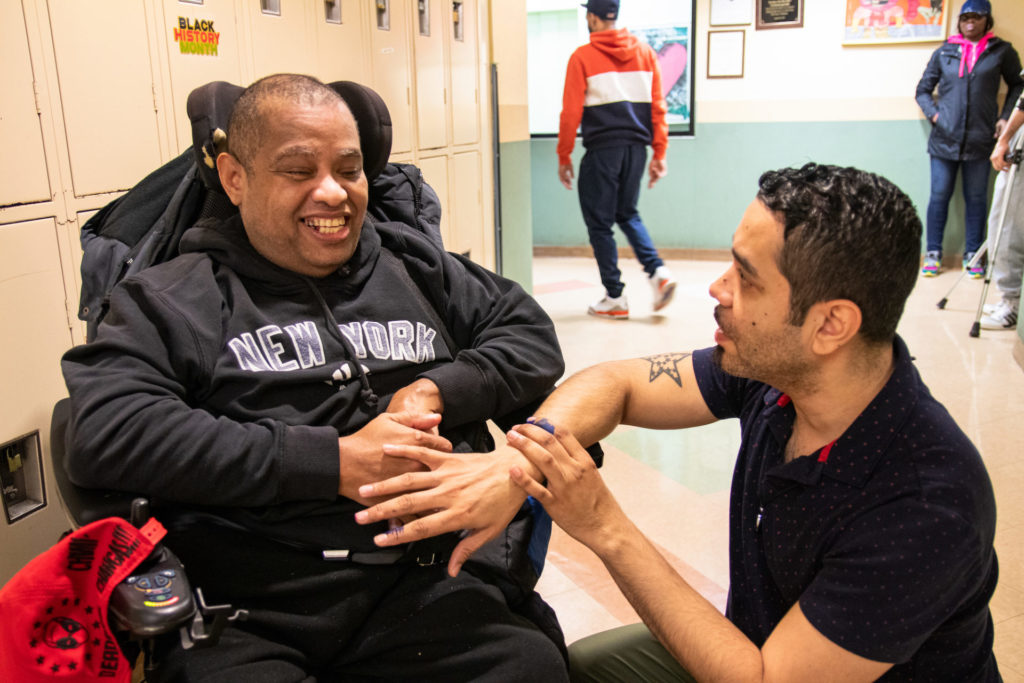 Velez and Gilbert Plaza-Rodriguez share a moment in a hallway at Brooklyn Day Hab.

Happiness really does flow through the halls of Brooklyn Day Hab. Velez says the happiness and pride is in even the smallest moments. He remembers a non-verbal man who attended Brooklyn Day Hab years earlier. After working with him for two years, Velez was taken by surprise one day.

“Out of nowhere, he mentioned my name! After all that time, not saying a word, and out of nowhere he says my name. I was in awe.”

Smiling, Velez pulls out a card that same individual made for him on Valentine’s Day many years ago with a photo of the duo placed in the middle of a heart-shaped frame.

“There are a lot of proud moments that I’ve had. I wouldn’t have been working here for 16 years if I didn’t think I was making a difference,” he says. 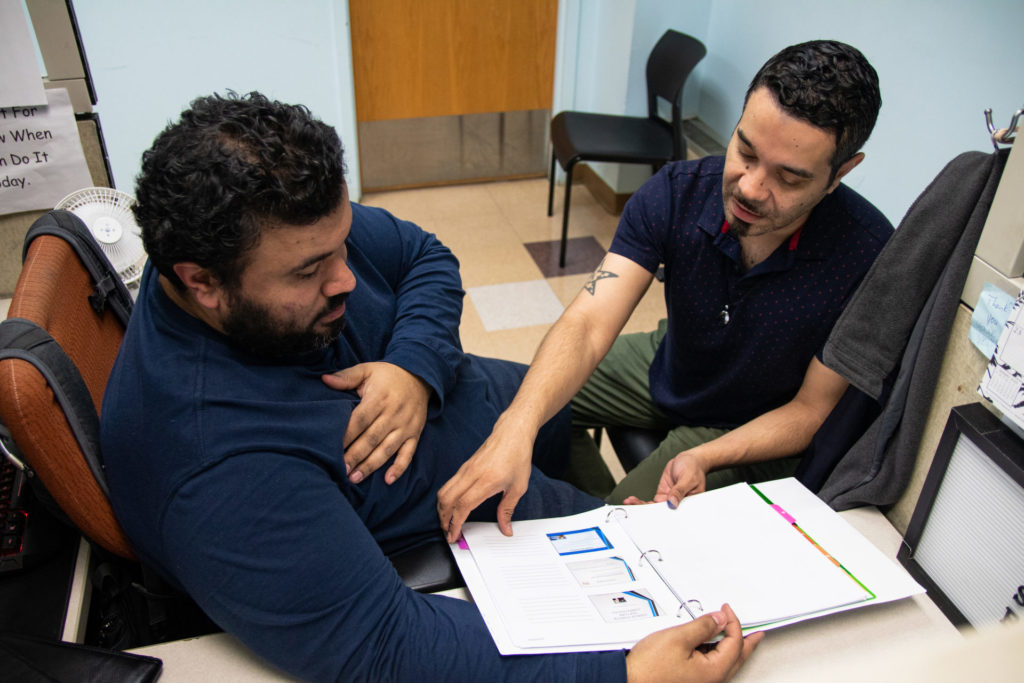 The individuals who attend Brooklyn Day Hab concur. Gilbert Plaza-Rodriguez, who has been attending HeartShare programs for over 30 years, says that in all that time he has never had an advocate quite like Velez, or “Eggie” as many individuals refer to him.

“Nobody has ever treated us like he does,” says Gilbert. “He gives us freedom. At home, most of us have no freedom—we have a lot of rules. People come here because of the freedom. It’s big.”

So much so, Gilbert says Eggie’s acts of kindness have brought him to tears.

“He is a good, beautiful person. It makes me feel beautiful,” Gilbert says. “Thank god we have a beautiful person like him—he came at the right time. I hope he can stay for many years more.” 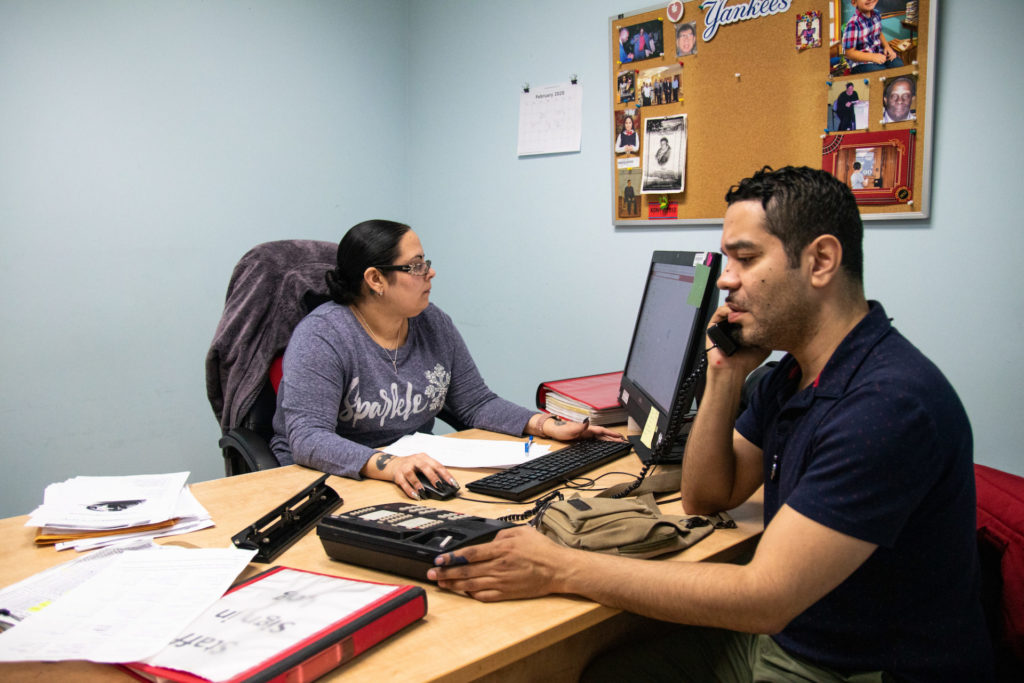 Velez and Assistant Coordinator Jenny Faria: “We do it together—everything is together,” she says.

George Barrios, whose passion is art and poetry, says Velez is the only person who has given his art a platform.

“That’s the only thing I do—my poems,” George says. “And the only one who hangs my work up is Edgardo. It makes me so happy. I know it’s a lot of money to get them framed.”

Edwin Corchado, Jr., Senior Direct Support Professional 3, has worked at HeartShare for 17 years. He, too, radiates pride and joy for his job and appreciates Velez’s work ethic and his willingness to teach him the skills needed to keep the program running.

“Edgardo, to me, has been excellent,” says Corchado, Jr. “Not just a boss. He goes that extra mile.”

Jenny Faria has been with HeartShare for 13 years and now serves as the Assistant Coordinator. She says that while paperwork does consume a lot of her job she agrees with her colleagues that the best part of her day by far is interacting with the individuals she now considers family.

Working with Velez, she says, is always a collaboration.

“He’s an amazing leader,” she says. “He’s very active with everybody. We do it together—everything is together. He genuinely loves the guys. They’re his life.”

Velez always knew he wanted to help people. After studying social work at Long Island University he first worked with the homeless population before beginning his career at HeartShare. 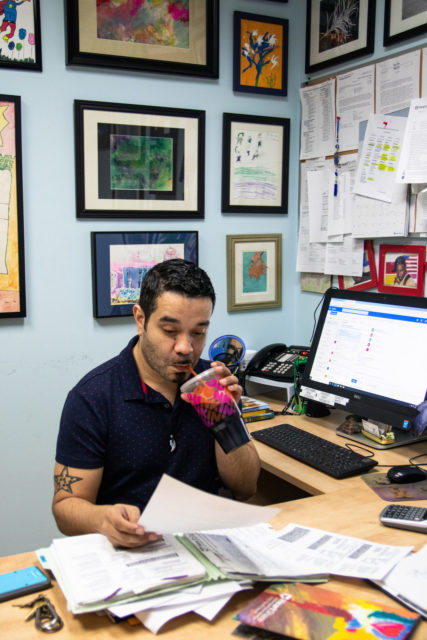 “Since I was little, my mom instilled empathy in me—empathy and helping others,” he says. “It’s always been my dream to actually help other people and see them achieve. Unfortunately, there is a lot of suffering in the world, but if you can help one person, you’ll be happy.”

To no one’s surprise, Velez’s work week is far from over when everyone goes home on Friday. He often spends his weekends in his office, completing paperwork that, with his dozens of other responsibilities, he could not get done during the week. He has also traveled to Albany on multiple occasions to advocate not only for more program funding but also to increase opportunities and salary for DSPs.

“As much as I love having the individuals here, I would like to see them progress, maybe go into employment services, and maybe find a really good job,” Velez says. “That’s my goal for them.”

“There are certain individuals that love the program so much they refuse to go anywhere else. Maybe it’s me, I don’t know,” he says with a laugh.