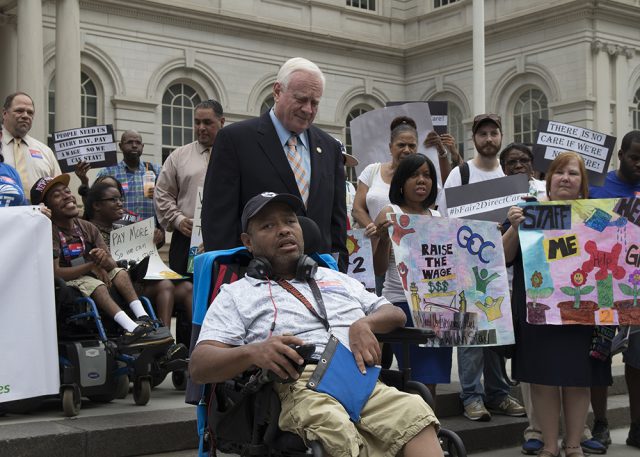 HeartShare advocate Gilbert Plaza spoke out on fair compensation for Direct Support Professionals, the frontline workers who have helped him achieve greater independence and in turn, a higher quality of life. Supporters at the rally included Senator Marty Golden (pictured), as well as Assemblymembers David Weprin, Marcos Crespo and Joseph Lentol.

(New York, NY)–HeartShare, which prioritizes the empowerment and independence of people with intellectual and developmental disabilities (I/DD), had one of its program participants, Gilbert, speak out at a fair wage rally at City Hall on Friday, July 15.

The rally, which is a part of the state-wide #bFair2DirectCare Coalition campaign, represents non-profits like HeartShare, who receive more than 90 percent of its funding from government, much of which goes to salaries for Direct Support Professionals or DSPs, the frontline workers caring for and supporting people with I/DD.

Gilbert, who has been a part of HeartShare since the 1980s, resides at HeartShare’s Giannattasio Residence in Bay Ridge, Brooklyn and works the reception desk at HeartShare’s Brooklyn Day Habilitation Program in downtown Brooklyn. His long-term goal is to live in his own apartment.

“Throughout the years, I have learned to be independent with support and training from direct support staff. Now, I know how to help other individuals because I have learned from staff how to help myself,” shared Gilbert on the steps of City Hall. “I now have a part time job and will live independently in my own apartment thanks to HeartShare staff. It is not a minimum wage job,” he concluded. 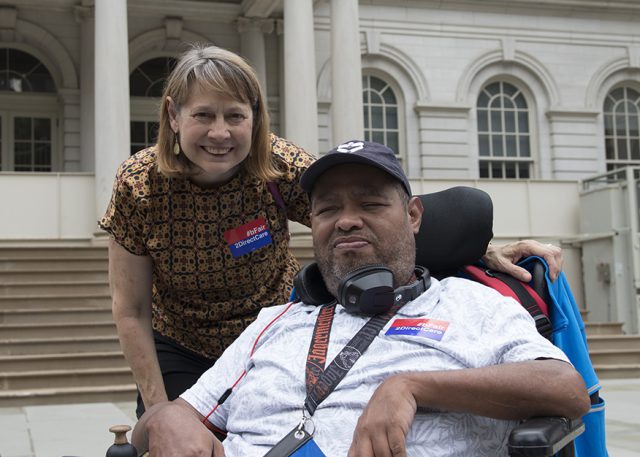 Gilbert is a notable self-advocate in the HeartShare and New York State communities, having attended the New York Advocacy Conference several times. This year, he also assisted HeartShare Wellness Director Dr. Vincent Siasoco during a lecture at NYU Lutheran to inform medical students of the needs of patients with developmental disabilities.

DSPs from YAI, Guild for Exceptional Children, and the Association for Neurologically Impaired Brain Injured Children also offered testimony on what their work means to them. Parents of children with developmental disabilities, who often are burdened providing intensive daily care, expressed gratitude and relief for having compassionate, well-training DSPs in their lives. Salaries for DSPs, average between $10.00 to $13.00 statewide, which is not a ‘liveable’ wage for the men and women who staff those demanding jobs.

Several elected officials expressed the need for increased funding. “Nearly 50,000 direct care workers currently make less than $15/hour,” noted Senator Marty Golden (R-C-I Brooklyn). “Everyone in our society deserves a fair wage,” added Assemblymember Joe Lentol (D-North Brooklyn). The rally also highlighted that the turnover of Direct Support Professionals impacts the quality of care provided. “It is important to guarantee a consistent level of care for individuals with developmental disabilities,” said Assemblymember David Weprin (D-Queens), who also is Chair of the Assembly Task Force for People with Disabilities. A report further investigating direct care vacancy and turnover, commissioned by S.7677-A, will provide further evidence on how to stabilize this segment of New York’s workforce.

This rally is one of several throughout New York to educate the public and elected officials about the need for funding from Albany. Additional rallies will be held in the Fall. 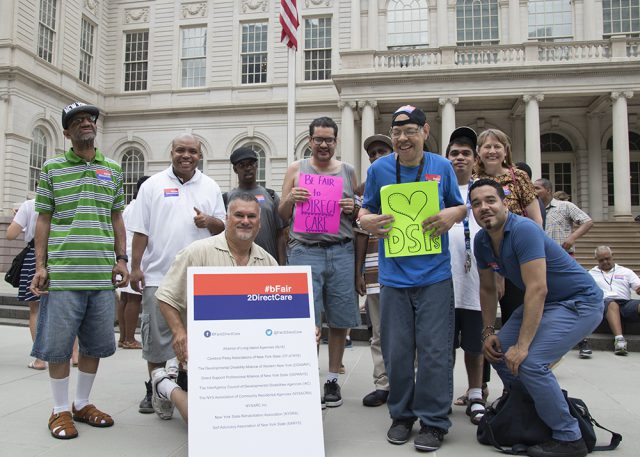