(Queens, NY)–HeartShare’s Evaluation Services for children with developmental delays have relocated to its pre-school sites in Richmond Hill and Howard Beach.

Due to insufficient funding coming from the New York State Education Department, HeartShare can no longer sustain its Angels on the Bay Evaluation Center, located at 162-30 Cross Bay Boulevard in Howard Beach for the past 22 years. HeartShare will now offer its evaluation services out of its pre-school sites at 115-15 101st Avenue in Richmond Hill and 82-12 151st Avenue in Howard Beach.

“The Center at Cross Bay Boulevard has held on for a long time. In addition to insufficient funding, the Center survived burglary and even Hurricane Sandy,” shared Linda Tempel, HeartShare Executive Director of Developmental Disabilities Services.

HeartShare evaluation professionals use observations and standardized tests to see how a young child with suspected developmental delays learns and responds to their environment. From there, HeartShare offers guidance on how to proceed with the child’s education plan, as well as how to access other resources in the community. 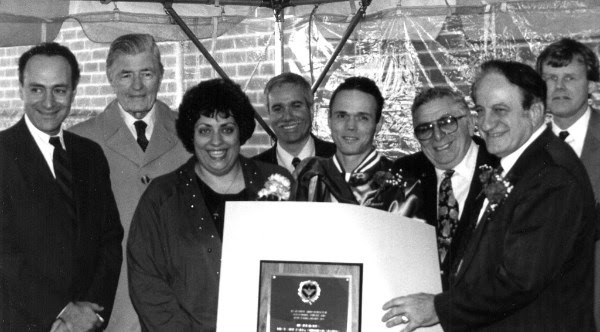 The success of HeartShare’s Evaluation Center was made possible with the support of many community partners, including, but not limited to the Lefferts/Liberty Kiwanis Club, Ozone Park Kiwanis Club and Angels on the Bay, a generous charitable organization, which has donated to the center since its inception. Celtic General Contractors helped rebuild the Evaluation Center after Hurricane Sandy. Carol Verdi is pictured at center with HeartShare President and CEO Bill Guarinello to her right.

The Center’s closing is indicative of the overall lack of increases for HeartShare’s pre-school education programs. HeartShare frequently educates the public and elected officials about why its evaluation and special education services are so vital. “When our pre-schoolers return to visit as adults, it’s easy to see that investment in early education works,” shared Verdi. “From a fiscal standpoint, it doesn’t make sense to underfund those programs, especially when government will have to sustain less independent people with intellectual and developmental disabilities later on in their lives.”

City and state government contracts primarily fund HeartShare programs, making those services vulnerable to underfunding each year. Additionally, competitive salaries make it difficult to retain quality HeartShare teachers who love the children they teach, but struggle without a living wage, which is determined by government allocations. HeartShare’s pre-schools lost about 13 educators last year and 16 this year with their move to NYC Department of Education Universal Pre-K (UPK) classrooms.

In addition to its evaluation services, HeartShare has four pre-schools in Brooklyn and Queens for children ages 3-5 with special needs, as well as UPK classes.