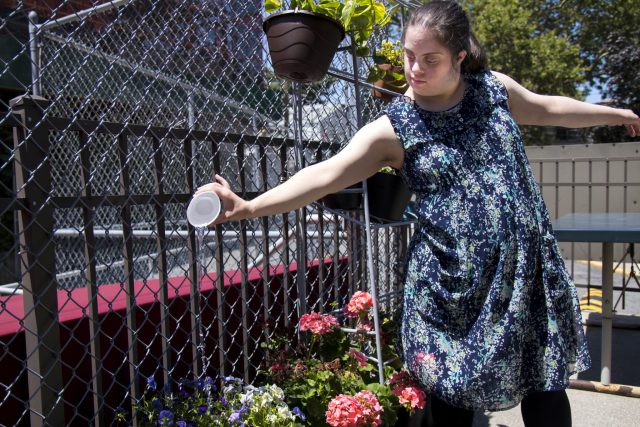 “When I saw Alexandra walk into our program at age 30, I was thrilled to see her,” said Russo First Step Pre-School Director Martha Kuszek. Martha started her HeartShare career in 1986. Fresh out of graduate school, Martha was eager to work with special needs children. One of those children was Alexandra. At the time, HeartShare had an early intervention program serving infants and toddlers with developmental delays. As a part of HeartShare’s Infant Program, young Martha taught baby Alexandra, who has Down Syndrome, at home. Alexandra also received speech, occupational and physical therapy at HeartShare. Martha and Alexandra were paired together once more in HeartShare’s Toddler Program. With this strong educational foundation, her parents were eager to send their daughter to Cuomo First Step Pre-School. “At the time, we didn’t know where to turn,” said Alexandra’s mother Maryann. “After finding HeartShare, I felt that my daughter was in the care of family.”

Even after Alexandra graduated from the HeartShare pre-school at age 5, her parents kept in touch with Martha. “Every year, Maryann and Joe came to the Education Services Dinner Dance, which is the annual fundraiser for the four HeartShare pre-schools and The HeartShare School,” explained Martha. “Even though Alexandra started attending the dinner dance as a teenager, I was surprised to see her at my program that day,” recalled Martha. Alexandra now attends HeartShare’s Union Turnpike Day Habilitation Program, which offers volunteer opportunities in the community. One of those jobs is distributing lunches at the Russo Pre-School. “I’m proud that HeartShare can be a part of a program participant’s life for this long,” said Kuszek. This year, Alexandra also will be moving into a HeartShare residence in Queens.