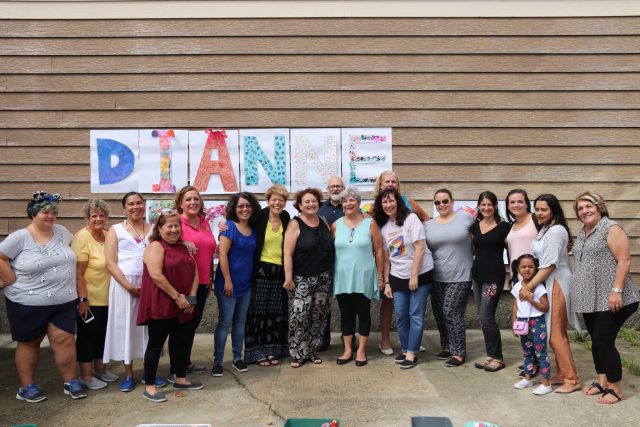 The HeartShare team surprised retiring First Step Director Dianne Cattrano with a rock garden to thank her for her tireless dedication to the staff and children with special needs. The rocks were painted by teachers, aides and HeartShare administrators.

Dianne Cattrano, the Director of HeartShare’s Cuomo First Step Early Childhood Center in Queens, will be retiring this year. Children, parents, and faculty of all five HeartShare schools, as well as HeartShare administrators throughout the agency contributed to a rock garden, which was unveiled on August 1, 2018 in honor of her over 30 years of service.

Earlier in her career, Dianne had the idea of creating a rock garden at the First Step Childhood Center but that idea never went further than two painted rocks that sat on her desk for three years. With Dianne’s retirement approaching, her colleagues put the idea into action, which resonates with Dianne’s mantra, “Don’t worry! It will get done!”

In June, the painting began. Dana visited all five HeartShare schools and the 12 MetroTech headquarters so that as many people as possible could paint and contribute to the rock garden. “In the process of making this garden, everyone was able to express in one way or another, the many things that you’ve helped us nurture within ourselves,” Dana said in a speech about Dianne at the rock garden unveiling.

In May, First Step staff and parents started gathering rocks from beaches in the Rockaways. Dana Decolator, the Clinical Coordinator of the Child and Family Support Department at First Step, gathered rocks during a weekend trip in North Carolina. Dianne’s granddaughter and her parents even sent their painted rocks from Florida.

Dianne started as an Infant/Toddler Home Base Teacher, developing the scope of HeartShare’s inaugural early intervention program. During her tenure at First Step, Dianne has always been at the forefront of early education.

Dianne was the inaugural First Step Director to implement a behavioral support curriculum. She spearheaded First Step’s National Association for the Education of Young Children (NAEYC) Accreditation. Dianne cultivated a relationship with St. John’s University, which has brought college volunteers to the school each year, and elected officials, who donate toys to the children each holiday season. She built a warm school community, where she has been receptive to both staff and parents. Other HeartShare pre-school directors have followed Dianne’s lead to a comprehensive, interdisciplinary, and balanced early education.

“I can’t believe how many people were involved in this. It is absolutely beautiful! I am still blown away by this project you all did for me!” said Dianne about the Rock Garden.

“We can never thank Dianne enough for the incredible difference she has made in the lives of thousands of children and families over the past 30 years, but we can let her know that her legacy and HeartShare’s gratitude will live on in Dianne Cattrano Rock Garden,” said Linda Tempel, Executive Director of Developmental Disabilities Services at HeartShare.

The rock garden was a special thanks to Dianne for all she has done for HeartShare and the Cuomo First Step Early Childhood Center. Her work, her care, and her determination in improving early education and establishing a supportive community has impacted children, families and employees over the last 30 years.