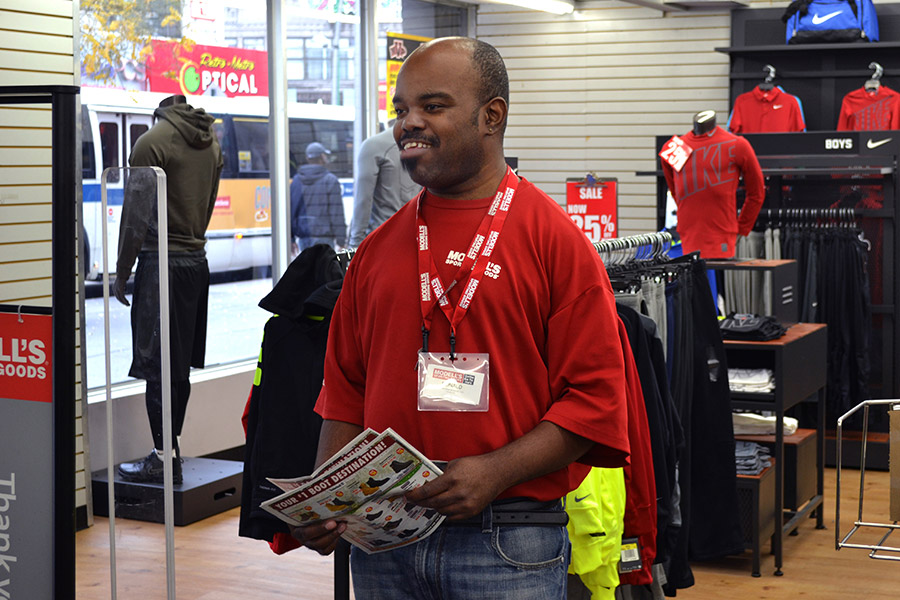 Thirty-eight year old Donald, a man with special needs, landed his dream job working as a greeter at Modell’s in downtown Brooklyn. “All I’ve ever wanted to do is work. And this is my dream job,” Donald shared. The job is an actualization of Donald’s expert knowledge and passion for sports, especially basketball, which he plays often. “This job is not only transforming Donald’s life, but his peers at the program, who are inspired and motivated by him,” said Lidia St. Omer, Senior Direct Support Professional (DSP) at HeartShare’s Brooklyn Day Habilitation Program, who has known Donald for 11 years. “Most people want or hope for the marginalized to be included in society.

At HeartShare, we don’t just feel that sentiment, we put it into action,” said HeartShare Community Resource Specialist Roni Soriano. HeartShare’s employment partners and their teams feel the same way. In talking about how much the Modell’s team enjoys, respects and depends on Donald, one Modell’s Associate, Luis Rodriguez, explained, “Everybody should be treated equally. Everybody is capable of playing a role in your company, such as working as a greeter, in maintenance or in stock. Businesses should take the time to see what these unique, motivated and skilled people can do. Don’t judge a book by its cover.”