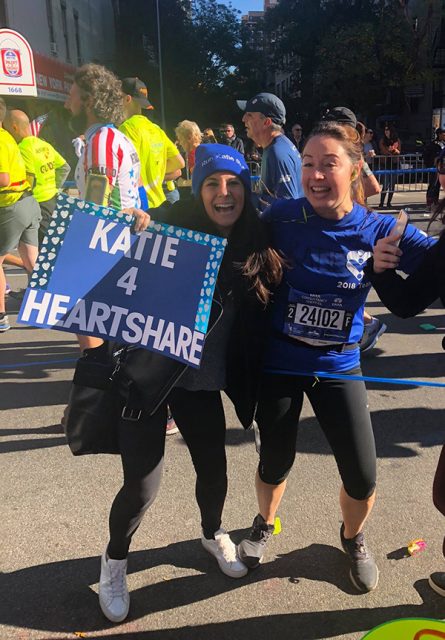 Runner Katie Selby and HeartShare’s Counsel Hayley Cowitt met in middle school and have been friends ever since. When Hayley mentioned that HeartShare was instituting its own marathon team this year, Katie jumped at the chance.

The native New Yorker, who works at a financial startup, just returned from 4 years in London and couldn’t think of a better way to jump back into the NYC scene. “I’ve run the NYC Marathon twice, and sometimes there are very large teams running for charities” said Katie. “It’s exciting to be a part of HeartShare’s inaugural team and get to know the other runners.” Katie trains by running in the park alongside a cross fit routine.

What will get Katie to the finish line? “My Hamilton soundtrack,” she joked. “But really, it’s all the people cheering you on. As a native New Yorker, there’s no better way to see the city on foot in one day—and my friends are often waiting for me at the finish line. This year, they’re planning on wearing matching HeartShare T-shirts,” said Katie.