The segment, which aired on Sunday, February 23, 2014 at 7:15 a.m., highlighted a group home named after Kerr in 2012. The Jim Kerr House, located in Queens, houses six women diagnosed with a range of mild to moderate developmental and intellectual disabilities. Mr. Kerr described the home to Sonstein Sunday host Shelli Sonstein, “All the women in the house have their own rooms. They have their own space to decorate. One woman is a Mets fan and her whole room is filled with Mets posters and pennants. There’s another who is a swimming champion and displays all of her medals. Another has a hobby in photography. It makes me feel good to know that the residents really feel at home.” 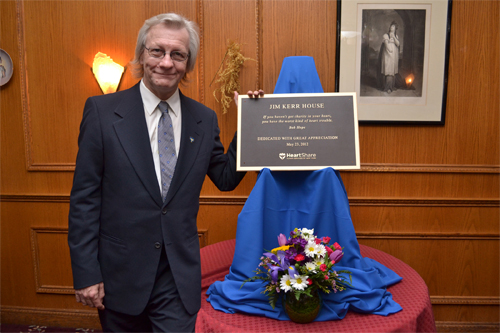 HeartShare’s more than 40 residences and supportive apartments provide a quality of life environment, founded on dignity and respect, to individuals diagnosed with developmental and intellectual disabilities. “There are very unselfish and dedicated people in the caring professions and they work so hard at the Jim Kerr House. The staff is there 24 hours, seven days a week and the relationships the staff have with the women are amazing to watch. I respect and admire them. HeartShare is staffed by incredible people and I’m in awe of the gift they give every day,” Mr. Kerr continued.

Despite serving as a long-time Board Member and supporter of HeartShare, Mr. Kerr rarely speaks about his contributions to HeartShare. Mr. Kerr humbly noted, “I’m not deserving enough to have such an honor, to have such a wonderful home named after me.” George Cincotta, HeartShare Senior Vice President for Public Affairs, who also participated in the Q104.3 interview, expressed his gratitude for Mr. Kerr’s leadership, “Jim Kerr has contributed so much of his time to HeartShare and to many other charitable organizations. We are just fortunate enough that Jim spends a lot more of his time with us. For all he’s given to us and the community — helping peoples’ spirits rise — all intangibles that you can’t buy. It was our honor to name this home for him.”

Mr. Kerr first learned about HeartShare when a Brooklyn restaurateur called in on his radio show and invited him to MC a fundraiser. After meeting the HeartShare team at the fundraiser, Mr. Kerr swiftly became passionate about HeartShare’s work and started volunteering. As a Board Member for 27 years, Mr. Kerr also serves on the Board’s Incident Review Sub-Committee, working to ensure that HeartShare’s programs meet the highest standards of care. Mr. Kerr was first honored at HeartShare’s 1986 Spring Gala and also has served as Master of Ceremonies for HeartShare’s Spring Gala, its signature annual fundraiser event. Mr. Kerr is proud of his service to HeartShare, which “started as a small local agency,” but, throughout the years, “has grown exponentially.” HeartShare, celebrating its 100th anniversary, serves almost 29,000 children, adults and families annually.