Shiloh and Rod Go to Washington 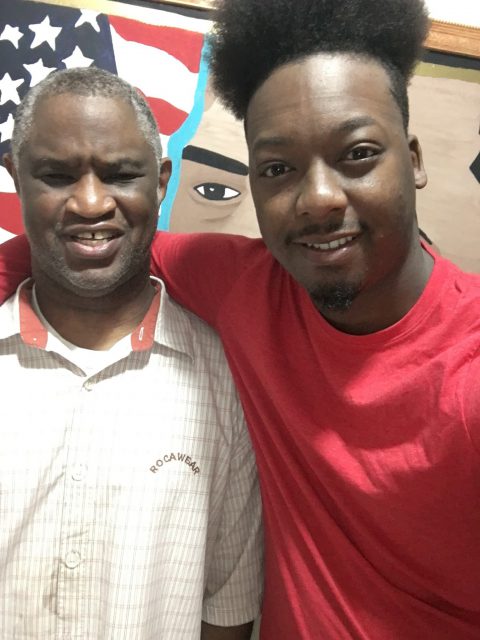 Direct Support Professional Shiloh Harper with Rod in front of the Obama painting in Rod’s room.

Shiloh Harper is a Direct Support Professional at HeartShare’s Ferraro Residence for individuals with intellectual and developmental disabilities. Shiloh has a compassionate disposition for Ferraro’s fourteen residents and always makes time to strengthen their role in the community through involvement with church services, fairs and strolls on the boardwalk.

Shiloh especially connected with Rod. “He walked right up to me, grabbed my hand, said ‘hello’ and then ‘we’re going to Washington,'” recalled Shiloh. Rod is interested in Washington, politics and patriotic things. Rod is known for singing “The Star Spangled Banner” at HeartShare events and in the community. He enjoys patriotic holidays, watches political debates and has a giant painting of President Barack Obama in his bedroom.

It was Rod’s dream to visit the nation’s Capitol. Rod carried his planned itinerary, including meals, hotel and places to visit everywhere and copied it over frequently. After speaking to his manager, Shiloh planned to accompany Rod and several individuals from the Ferraro Residence to D.C. Although it was Shiloh’s first trip there, Rod was an outstanding tour guide. Rod showed Shiloh and the group the White House, the Capitol Building, as well as the Lincoln and Washington monuments. “He even told us a little bit of history at each place we visited,” shared Shiloh.

For helping Rod take his dream trip to Washington D.C., Shiloh Harper is a 2016 Everyday Hero.

Thank you for your work, Shiloh!