Board Member Rosanna Scotto: “HeartShare Still Run Like A Family” 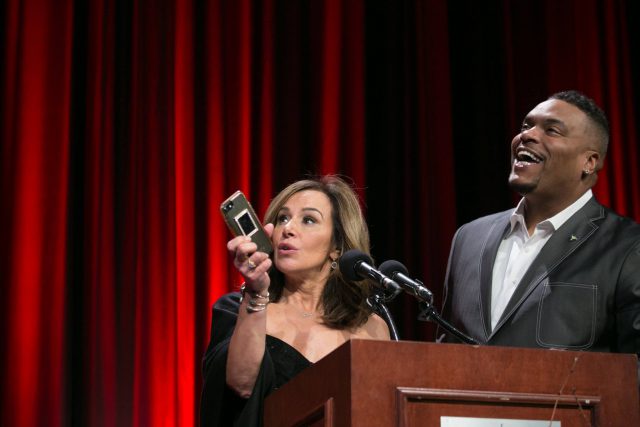 Board Member Rosanna Scotto, alongside actor Sean Ringgold, rallied guests at the 2017 Spring Gala and Auction to whip out their cell phones and contribute with a mobile donation supporting the children, adults and families in HeartShare’s care.

Rosanna Scotto, the co-anchor of Fox 5’s Good Day New York, has been a part of HeartShare for over 30 years now. She joined the HeartShare Board of Directors over a decade ago.

How did you first get involved with HeartShare?

Wow, this was over 30 years ago. I was at Channel 7 at the time. Someone introduced me to Bill Guarinello. I learned about the amazing work that was being done in the community. I was so impressed and I’ve stuck around ever since!

What stands out most to you during that time?

I’ve met so many people at HeartShare, most notably adults with intellectual and developmental disabilities (I/DD) living in your group homes. It’s always memorable when I’ve had an interaction and I’ve learned how HeartShare has changed a life.

From your perspective, how have we changed lives?

We’ve helped so many people become more independent. It’s something we really take for granted. If someone in our programs wants to work, for example, we help them with that.

How has HeartShare changed over time?

HeartShare is a bigger place now. We’ve expanded programs and affiliated with other organizations. It’s a very big company. But you know what’s incredible? No matter what, HeartShare is still run like a family.

What is your favorite HeartShare event?

I try to stay in touch as much as possible, whether it’s ArtShare for HeartShare or the Celebrity Dinner, where I can get to know your biggest donors and supporters—they really are beautiful people who just want to help. I also really love the Gala because I can see everyone I know in the HeartShare community!

What is your personal connection to HeartShare’s work?

I have a nephew who is autistic. It really moves me when I see an entire community dedicated to helping children and adults like my nephew. It’s about education, but also life skills. HeartShare’s services are so important and I’m proud to support its mission.

HeartShare President and CEO with long-standing Board Member Rosanna Scotto at the Annual ArtShare for HeartShare exhibition, which empowers children and adults with disabilities in HeartShare’s care by showcasing their creative works throughout New York City.