On the night of November 30, 2013, director, writer and producer John A. Gallagher fell asleep on the couch in his East Side apartment after a long day on the set of his latest movie. He awoke six weeks later from a coma in the Burn Center of New York-Presbyterian Hospital and learned that he had been overcome in his sleep by smoke inhalation from an electrical fire. The NYFD firefighters summoned to the scene had been involved in a traffic accident on the way to his rescue, delaying their arrival by 20 minutes. He’d been minutes away from becoming a statistic.

Gallagher remained in the hospital for six months. He was on a ventilator, suffered kidney failure and had to have his arms locked down so he wouldn’t rip out the life-support tubes. He wasn’t allowed to drink water for several weeks because doctors feared flooding his damaged lungs. He suffered third-degree burns over 20 percent of his body, endured excruciating pain and underwent three skin grafts surgeries. He lost the ability to walk. Doctors said his chances of survival were slim, as were the chances he would ever direct again.

But Gallagher did survive, and thrive, through sheer force of will and the support of his loved ones.“I was pumped full of morphine and oxy something to kill the pain and worked like hell to get off the drugs and manage the pain mind-over-matter style,” he says. “Ultimately, because of the love and prayers of my family and friends—and, believe me, you really find out who your friends are in this kind of tragedy—I’m still here. I am blessed with an incredible support system, just like Jimmy Stewart in ‘It’s a Wonderful Life,’ and they never let me feel sorry for myself.”

It was one of those friends, former NYPD officer turned actor, director, producer and frequent collaborator Steve Stanulis, who brought Gallagher back to filmmaking—and back to life. Just a month after Gallagher returned home from the hospital to a completely empty but renovated apartment, Stanulis asked him to direct his new movie, the romantic comedy “The Networker,” starring Stanulis, Stephen Baldwin, Sean Young and William Forsythe. 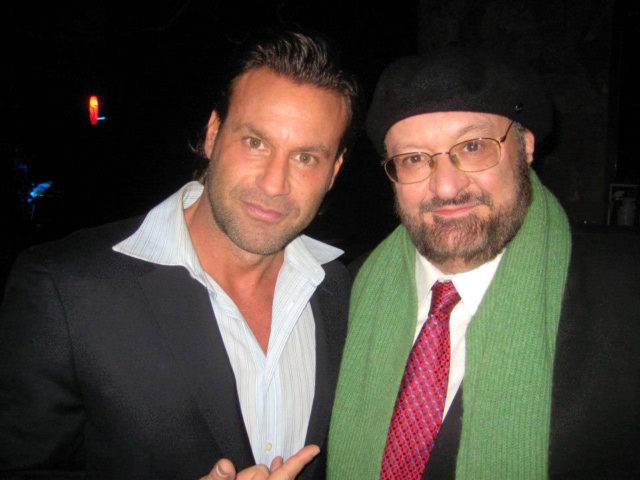 Steve Stanulis and John A. Gallagher

“John was always my first choice,” says Stanulis. “We’ve known each other since 1999 and I thought having him direct would be a home run. He’s helped and inspired a lot of people over the years, myself included. Not only did I get a talented director, I got a chance to give back and help him return to doing what he loves to do.”

“I will always cherish my brother Steve for this gesture,” says Gallagher, who has since directed another feature, “Sarah Q,” produced two others and consulted on three more. He’s also directed three shorts that have won nearly 30 awards and been honored with two career achievement awards. He’s resumed teaching and coaching actors, and written or co-written two books.“

While I can no longer jump around on set, I direct out of a director’s chair or a wheelchair, with no detriment to my talent or the film’s schedule as long as I don’t do Westerns! Yes, I learned a lot from the life-changing experience, maybe most importantly, don’t let people—even doctors— say you can’t do something, and how important it is to make the most out of every single day, because, God forbid, it could just be your last. Eternal thanks to everyone who aided, supported and helped my recovery. I’m also just amazed at all the important people in my life who I met only after the fire; it’s unthinkable to me that if I had not pulled through in what is clearly a miracle, I wouldn’t enjoy the benefit and joy of their friendship. There are so many and I am forever grateful. My life will never be the same but I’m alive and I thrive. So, on to the next movie. It’s a good one!”