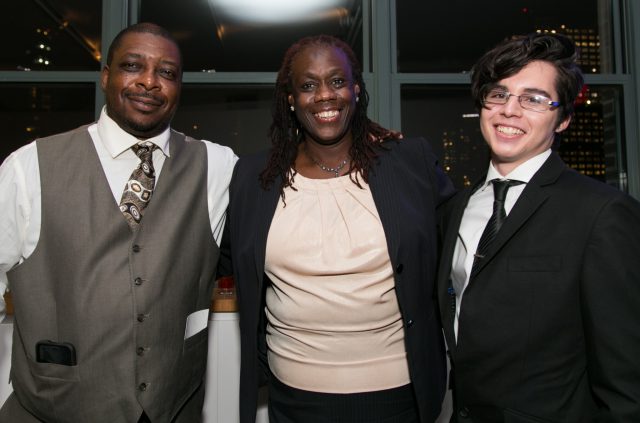 George Goode of Jamaica Hills Residence, Antoinette Davis of Richmond Hill Residence with one of our youth residents, Carlos, at the HSVS Annual Benefit.

Each year, HeartShare’s leadership selects dedicated employees to participate in its Management Training Program (MTP). MTP is for both new and seasoned professionals who lead teams at the agency. This is a series highlighting those people–to acknowledge their personal accomplishments and to share the breadth of what HeartShare and its Family of Services does in the community every day.
Finally, we’re having this conversation! I started to learn a little bit about your background when we were scouting Eric’s story over the summer.
George Goode: Yes, we can definitely chat for a little bit. I’m making some pork chops.
That sounds delicious. It’s really nice that you’re making a home-cooked meal for everyone (at Jamaica Hills Residence). So, how long have you been with HeartShare St. Vincent’s?
GG: Well, I started in 2012 when we were still St. Vincent’s. I worked at a “Close to Home” program. The aim of the program was to keep young men who ordinarily would be sent upstate to live in a residential program closer to their families. It was a home setting in Bayside, but it was restrictive. Yes, those boys had committed crimes, but we didn’t need to use restraint. We needed to listen to them. I would communicate with their school counselors and when they were home, I would talk to them as much as I could.
And then what happened?
GG: Those boys would stay for 6 or 7 months and then transitioned back home. In addition to the support we provided, we also facilitated home visits. Their families came to Bayside, as well.
But this program doesn’t exist anymore, right?
GG: Correct. After the affiliation, we were required to reapply for positions within the agency. I was hired as an Assistant Manager at Jamaica Hills Group Home. The first thing I realized is that no one was talking to the kids! It was an “us versus them” mentality. Mariam Ortiz, who has since assumed by position as Assistant Manager, had the same shift as I did. This was the beginning of our planning to make Jamaica Hills more of a family place.
How did you achieve that?
GG: We wanted everyone in the residence to be closer. It felt dark and gloomy, but became brighter through our efforts. With frontline staff at the residence, administration in downtown Brooklyn and a rotation of visiting social workers, we’re all in different places. Eric (Williams) encourages us to work as a cohesive team.
How did you bond with the residents?
GG: We just started talking to them and actually listened to what they had to say. Regarding school, we would ask “What do you need? What can we do?” This kind of active interest in their lives helped build better relationships.
That must have been difficult at times, though.
GG: Absolutely. Especially when the boys believe “no one cares about me.” There was a young man planning to take his GED. He wanted out of the exam and I was angry with him. The young man questioned me. He said, “Why do you care? Why are you angry?” I knew that he could do more if he tried. I explained that. The young man said he never had anyone care about him like that. He went back and passed the exam. We’re really proud of him. We’re proud of everyone who lives here.
That’s incredible. How were you able to do that?
GG: I just think about my sons, who actually are both 23. I treat the boys here as I would treat my sons. I want them to do better. I also understand because I was in their position.
What do you mean?
GG: No one is perfect. That’s what I tell the guys. I got in trouble at an early age. At their age, I felt that no one listened to me. I promised myself that if I were ever in that position, I would do everything in my power to listen and to communicate.
How did that change for you?
GG: I had someone who inspired me, Reginald Greene. When I was a teenager, he would come around and ask me to work with him. He was like a father figure to me. I knew him from when I was 18 until he died in 2006 or 2007. But that’s what I try to enforce here — an environment where our boys are free to explore and to grow, an environment with a positive attitude. I’m proud to say that many of the young men who live here have moved into their own apartments and have gone off to college.
Is there anything else you’d like to add?
GG: I’d like to thank my wife, Marie Thompson, who has been there when my work phone never stops ringing. She understands what we’re trying to achieve. 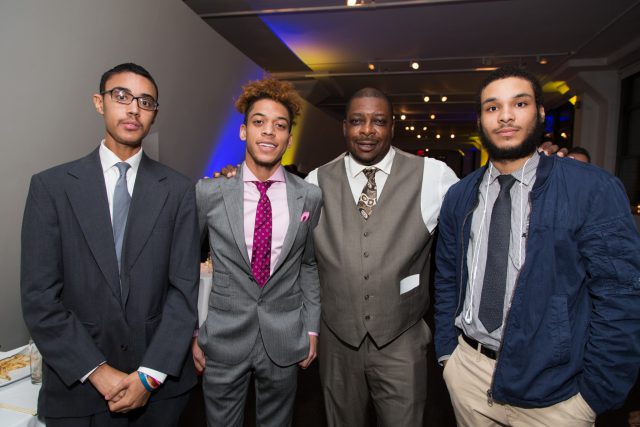 George Goode of Jamaica Hills Residence with young men in our residential program at the HSVS Annual Benefit.